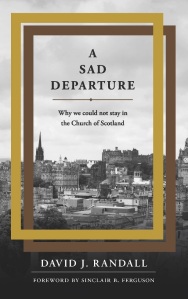 Randall, David J. A Sad Departure: Why We Could Not Stay in the Church of Scotland. Carlisle, PA: Banner of Truth Trust, 2015.

FIRST, I need to give a shout-out! A buddy of mine from The Master’s Seminary sent me this book as a gift! While I won’t publicly name him, I just want to say thanks for the book! It was a blessing to read and I am even more grateful for the friendship that God has given to me through this kind brother.

Summary: This book is about the controversy in the Church of Scotland over the ordination of openly practicing homosexual clergy. Randall chronicles the denomination’s journey from holding the traditional (he rightfully calls it the biblical position) to the acceptance of the revisionist position.

There are a total of 8 chapters. The first seven chapters comprise nearly two-thirds of the book (pp. 1-132). The final chapter, which is a collection of testimonies of some who have left the denomination take up the final majority (pp. 133-182).

The first chapter is an introduction to the issue in the Church of Scotland. He argues that there has been a departure from the Word of God as the authoritative center of the church which has led to faithful Christians leaving the denomination. The second chapter is a history of the Church of Scotland and some of the major events in their polity that led to their acceptance of ordaining homosexual clergy. The third chapter presents arguments for faithful Christians within the denomination on whether or not the issue is worth leaving or not leaving. The fourth chapter deals with the Bible’s teaching on the issue of homosexuality. He argues that the Bible categorizes homosexuality as a sin and that the text cannot say otherwise. The fifth chapter is an argument for why readers must hold on to the teachings of Scripture. Since the Bible teaches that homosexuality is a sin, some may suggest throwing the Bible out all together. In chapter five, Randall argues that the Scriptures is timeless in its truth for the church. The sixth chapter is a history from the Reformation to the present about major splits in ecclesiology. He chronicles the Reformation split from the Roman Catholic church, the rise of fundamentalism, and the differing position of some of Europe’s greatest recent theologians (Martyn Lloyd-Jones, John Stott, and J.I. Packer). The seventh chapter is a report on where many churches who have left the denomination have gone. He also ends with a reminder that Christians ought to be faithful to God and His Word.

Weakness(es): The book consistently calls for the importance of the church (which is not a bad thing), but given his context I think his understanding of the term may be much broader than some may naturally think. It seems like his understanding of church is often used as a synonym for “denomination.” So when he calls for action to take place in the church, he really means denomination.

Understandably, the point of the book was to chronicle the departure of many churches from the Church of Scotland over the ordination of homosexual clergy, but what about applying these principles to other issues. Where is the line drawn for others who are on the fence over other particular doctrinal issues? Where is the line drawn for people who see that the trajectory of their denomination is headed toward the same place?

Strength(s): The tone of the book is a breath of fresh air. Randall writes with compassion and great humility, “Those who have left the Church of Scotland do not claim to be ‘better’ or ‘holier’ than anyone else; it is simply a matter of seeking to be faithful to what God has revealed and what we believe to be his guidance” (p. 6). This humility is lacking on both sides of the debate and he exemplifies godliness when confronting such an emotionally charged theological subject.

Another great strength is his defense of orthodox Christianity. He has a broad knowledge of several disciplines within Christianity and it is great to see it implemented in the context of the church and not merely academia. He even has a section that deals with issues related to textual criticism and canonicity without overwhelming the reader (pp. 74-78).

The book is also encouraging for saints seeking to uphold the biblical position on sexuality. Especially in his particular setting (Europe), conservative readers will be delighted to see the remnant of God’s people half-way across the world.

Another strength is his footnotes. Randall often points readers to more extended works on issues on sexuality or even fundamentalism. The rise of liberal Christianity (and I agree with Machen that the term “liberal Christianity” is not really Christianity at all) has been a major detriment to the church’s testimony to the world. I was particularly encouraged by his footnotes that will lead readers to excellent sources (both academic and practical) on issues such as biblical sexuality, church history, theology, and ministry.

I would also recommend this to church leaders, especially pastors who work within denominations. It can help give clear pictures of the type of attitudes or slight of hand tactics that the Devil could be inserting within your denomination or even your local church.

I would also recommend that those who are on the opposite side of the debate to read this work. Because of its incredibly humble tone and devotion to Scripture it may be able to remove any presuppositions you may have about those who want to preserve the biblical teaching of sexuality.

“Those who have left the Church of Scotland do not claim to be ‘better’ or ‘holier’ than anyone else; it is simply a mater of seeking to be faithful to what God has revealed and what we believe to be his guidance” (p. 6).

“Liberals often assert that the things that unite us are greater than the things that divide us, but if we are divided on the question of scriptural authority and whether we adhere to God’s teaching there, then we are seriously divided” (p. 9).

“It simply will not do to acknowledge Scripture’s authority at points where its teaching matches what, on other grounds, we want to maintain and at the same time ignore, suppress or contradict it where it clashes with our own desires. To go down that road is to believe not in the Bible but in ourselves” (pp. 16-17).

“There is no more important issue than that of the authority of the word of God because our belief about the bible determines our beliefs about everything else” (p. 20).

“We believe that it is the liberals who are the real schismatics, in that they depart from the faith once for all delivered to God’s people (Jude 3)” (p. 26).

“Such ‘stay-ers’ [those who stayed in the denomination although they openly ordain homosexual clergy] maintain that a decision to remain within the Church of Scotland does not equate with an acceptance of the decisions of the General Assembly. Actually it does! That is what is meant by Presbyterianism. They may register dissent but the decision of the General Assembly are binding on the Church and while ‘liberty of opinion’ can be recognised in certain matters, the truth is that Assembly decisions define the position of the denomination. Those who remain in the denomination simply are part of it” (p. 45). This quote he essentially argues for stay-ers being guilty by virtue of association.

“To suppose that we can pick and choose which parts of the Bible we accept and which parts we reject or ignore, is to elevate our selves and our own judgment above the Bible and thereby reject the authority of God’s word. It is no longer the Bible we believe but ourselves!” (p. 62).

He quotes Sinclair Furgerson work, From the Mouth of God (p. 3), “If Scripture said it, then God said it. They regarded the Bible as God’s own word. Through it he speaks. To it Christians listen. Its teaching Christians believe. Its commands Christians obey. Its pages Christian love” (p. 67).

” . . . the teaching of Scripture is foundational to everything else in the Christian faith. If the truthfulness, reliability, and authority of the Bible were to be undermined, then everything would be ‘up for grabs’ and open to argument and re-moulding according to the desires and whims of its readers” (p. 72).

“Another indication of the genuineness of the New Testament documents is their frequent warnings about the cost to following Jesus; the New Testament does not downplay the demanding nature of Christian discipleship in an effort to make the message popular” (p. 86).

“There are parts of Scripture that we find difficult, but one is often reminded of the remark attributed to Mark Twain that the parts of the Bible which bothered him were not the parts he did not understand but the parts he did understand only too well! The Bible is not always a book of comfort: it comforts the disturbed but also disturbs the comfortable” (p. 91).

“It is not that we are called to worship a book; it is wrong for critics to accuse evangelicals of bibliolatry. We worship the triune God, but when we ignore, set aside or turn away from his word, then we are opening ourselves up to deception and falsehood” (p. 94).

“The fellowship and public life of churches should be such that people can indeed investigate, but membership must involve a profession of faith and commitment to discipleship” (p. 109).

” . . . there is a difference between endeavouring ot be culturally relevant and allowing the culture to shape and mould our attitudes, or between being seeker-sensitive and seeker-driven. We are not called to commend the gospel by making it something other than it is, or by toning down its demands in order to make it more attractive to unbelievers . . . Christianity is not designed to make churches or Christians popular. sometimes the cost of gaining a place at the world’s table is simply too high. Gospel faithfulness calls for resistance to the seductive voices that offer us acceptance and even power so long as we do not say or do certain things the world dislikes” (p. 120).

This quote comes off an illustration he gives where ants had eaten away at the interior of a house. The owner returned home to find his house collapsed. “The Judaeo-Christian heritage and foundations of Western society have been subjected to such undermining for a long time, under the influence of secularism, materialism, and multiculturalism. At the same time many ‘ants’ have been at work within the church, calling in question teachings and practices that had been taken for granted for many generations” (p. 129).